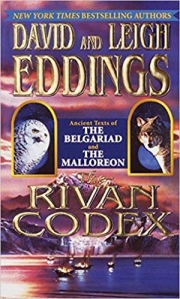 David Eddings once said he never read fantasy books for fear of contamination. Other writers, Stephen King included, say to read all the time, as much as you can, whenever you can.

I’ve decided to take the Stephen King route and am going to read fantasy books I’ve never read before and reread ones I have for the next few weeks. First up, many people’s (mine included) gateway into fantasy, the Chronicles of Narnia.

Any suggestions for series or standalone fantasy novels would be gratefully received!